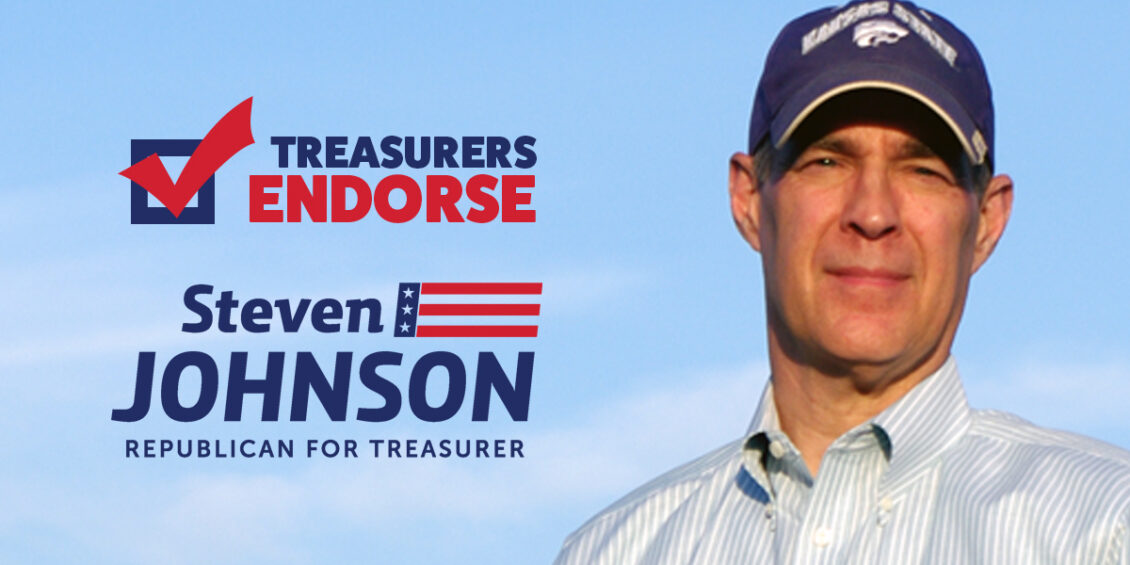 “I’m proud to endorse Steven Johnson for Kansas State Treasurer,” said Congressman and former State Treasurer, Ron Estes. “Right now, the Biden administration is destroying our economy and incentivizing corporations to invest in his woke energy policies. Kansans deserve a state treasurer who will relentlessly protect Kansas taxpayer dollars and invest in ways that align with our shared Kansas values while ensuring our taxpayers see returns on their investments.”

Estes served as the Kansas State Treasurer until his election to congress from the fourth congressional district.

“I’m excited to endorse Steven Johnson for Kansas Treasurer,” said Congressman and former State Treasurer, Jake LaTurner. “As the former Kansas State Treasurer and current member of the U.S. House Oversight and Reform Committee, I know it’s imperative to have watchful eyes on how government spends our taxpayer dollars.”

LaTurner served as Kansas State Treasurer prior to his election to congress from the second congressional district.

“We must have a State Treasurer we can trust with our investments and will fight to end wasteful spending,” said LaTurner. “Having served in the Legislature with Steven Johnson, I’m confident he will do a great job holding government to account and look forward to supporting his campaign this fall.”

Johnson campaigned through the primary on his experience in the financial services industry and his work in the Kansas Legislature reducing debt and saving taxpayers money.

Johnson is a former Vice President at Ameriprise Financial who has been serving in the Kansas House of Representatives since 2010.

“Steven Johnson is uniquely qualified for the job of state treasurer,” said former Kansas State Treasurer, Tim Shallenburger. “When Steven Johnson ran for the legislature, defeating an incumbent Democrat, he accomplished everything he promised, fixing the state pension system and saving taxpayers billions.”

Shallenberger is a former Speaker of the Kansas House of Representatives.

*Former Congresswoman and State Treasurer Lynn Jenkins (2003-2008) is a donor to Steven Johnson for State Treasurer, but is prohibited by a board membership from endorsing political candidates.